Native American Pale Ale Rock (or, How I Came To Know The Great Unkown) 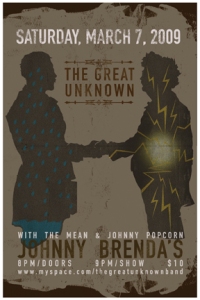 The February sun had set on Saturday night and Theatre 941 in Northern Liberties was becoming quite crowded with the weird beards and biceps cartoons that can so often be found wherever the mighty blue ribbon is served. Everyone was gathered that evening on North Front Street for the first annual Pabst Blue Ribbon Art & Craft Fair, which, for the nominal entry fee of $6, promised live music, an endless well of the beer being praised, and wall-to-wall PBR-inspired wares like red white and blue quilts, beeramid cupcakes, and bottle-lid cufflinks.

I had no intention of discovering new music that night. I was there to cover the event for Beer Magazine and around 7 p.m. found myself talking to Julie Roboczi, the show’s founder and organizer. Roboczi heads up the venerable Philadelphia Independent Craft Market and had, on a whim of inspiration, decided to launch this first of many PBR fairs to come. We were halfway into a chat about the event when a broken bathroom poet arrived on the scene to declare an emergency.

“I was sent to tell you there’s a problem with the bathroom,” said the young man in a brown leather coat trimmed with sepia fur. He had appeared from nowhere, leaned in, and spoke in an easy, calculated rhythm, like the bathroom was a lady and its problem was a broken heart. He wore dark country jeans with a rolled left cuff, workingman shoes, and a hapless fedora on a curly head of hair. His wide, unblinking eyes bounced from corner to corner. “I think you’ll want to attend to its needs,” he said. And then he smiled.

The purple costume feathers sprouting from the head of Roboczi twitched in time with her mild flustering as armies of ironic sneakers marched around her and so many tattooed fists clutched cans of warming Pabst against their patch-work hoodies and striped cardigans. The music was loud, the din beneath the buzzing fluorescent lights getting boozier by the minute. A malfunctioning bathroom was indeed an urgent matter. “Well,” she said, “I think I should go see to it then. I’ll be back. Excuse me.” And then she smiled. And then she was gone. I was left standing next to the messenger.

“You don’t want that tonight,” he said, still darting his eyes, still smiling. “Lots of PBR going down easy. Lots of pissing going on, I’m sure.” He took a sip from his can of Pabst and swallowed hard. “Like lava.”

“What’s that?” I asked. His voice was low and muted beneath the thundering of some punk outfit playing loudly in the adjacent room.

“Like laaava.” He drawled. “Laaava. Pissing lava.” I wasn’t sure what he meant by this. Not in the least. But whatever he was trying to say was clearly dear to him, clearly the most important moment of that moment because his eyes stayed wide and the humor of his internal monologue registered with every slink of his puckish frame. So we kept on talking.

This, I came to find out, was none other than Todd Henkin, and Todd Henkin’s band was about to go on in thirty minutes. “We’re The Great Unknown,” he said. “But we’re different than what you’re hearing right now. It’s nothing like this.”

“This” was thudding, post-Pixies metal mixed with a dash of slick Interpol angst, the kind that comes on at 2 a.m. after one too many PBRs. “We’re more like…Americana? Or uh, or like roots style music. Lap steel and all that. I don’t know. It’s…it’s not like this. It’s not PBR kind of music, I don’t think.”

“So what kind of beer should somebody drink to your music?”

“I don’t know. Maybe an IPA? Yeah!” Henkin liked every pet theory that came to mind. And he really liked this one.

“Right! Yeah. We’re an India Pale Ale.” He laughed a little and tossed off the moment with a shrug. It was then I realized that I wasn’t sure about anything he was saying. I had been at the craft fair for nearly two hours at this point, and to be sure, nothing breeds suspicion quite like these sorts of No Libs gatherings. Everything is a joke and everything is a serious edict at once. Sincerity and sarcasm do a mad, opium dance of the dead and suddenly all one is left with is the certainty that nothing is certain. Ever. For all I knew Henkin was full of shit. For all I knew he could have been a solo hip-hop free stylist who dressed as a clown on stage and rapped about Kierkegaard’s latent fascination with Muppets or accountants with Dixie Cup fetishes.

Or he might not be a musician at all. Who was to say? This was Northern Liberties. This was Pabst.

“Either way,” he continued, “I don’t really like the term ‘Americana.’ That’s not it. Maybe we need another genre. Like…like native American.”

“But then people might think about American Indians,” I said, noticing for the first time a subtle scar that ran from the corner of his mouth to the dip of his five-o’clock chin. “I don’t think that’s what you’re going for.”

“Bob Dylan was an American Indian?” This, I knew, was certainly not true.

“Hell yeah! He was an Indian.” Henkin laughed again.

“Dude, he was Jewish. You’re telling me he was a Jewish American Indian?”

“Oh…wait. No, yeah. Jewish! He was Jewish.” More laughter. More mad, darting eyes. He looked at me like he was on the lamb and I was about to call the cops. “That’s what I meant. Jewish. They’re so similar, ya know? Jewish. Indian. I get ‘em mixed up. So maybe Jewish American rock? Whatya think?”

The conversation continued like this for a few more minutes until Robosczi finally returned to tell us all was right with the flushable world. I shook Henkin’s hand and told him I was anxious to hear the band. He told me to find some IPA.

Later, while waiting in the back of the theatre for some more PBR to arrive (the natives growing restless) I began to hear the copper strumming of an acoustic guitar. The thudding of a country bass. The slick slide of a lap steel. The Great Unknown was warming up. When the new batch of beer finally arrived I grabbed myself a chilled, cozi-less can and made my way to the crowded front room, where I found Henkin and Co. already well into the second song of their set.

So he was telling the truth after all.

For thirty minutes I watched The Great Unknown churn out some of the most exciting and finely crafted American music I have had the pleasure of hearing in this city. Henkin lead the outfit with his loose acoustic and sharp vocals, backed all the while by a jangly electric guitar, sweet and subtle lap steel, excitable bass, and riverstone drums. They were harmonizing three parts, laughing between beats, and moving in mountain step with one another the way one imagines wolves might if they had smiles and voices and hands to play such sweet, rollicking tavern anthems to the night.

For thirty minutes I watched The Great Unknown conjure up images of its woozy urban cowboyism played against the mossy backdrop of an American forest, or through the smoky blur of a basement in the dark, pensive Pennsylvania hills. Henkin sang about love declared to sleeping ladies and whistled his way through a number’s closing. He made Tom Waits references between songs and all the while kept darting his wide, junkyard eyes from corner to corer, just as he had done when I met him less than an hour before.

For thirty minutes I watched the members of The Great Unknown have the time of their lives, as though every number was the closing of a concert given to celebrate the end of the world. I watched them inspire some in the crowd to belt out delirious rebel yells that would make the sober eyes of nuns rattle in their heads and young women shudder for the impossibility of affection. This was the young man music for which rock and roll was first invented. The music of getting drunk when it matters the most. The music of reckless love in dusty jukebox corners. The music of being snowed in by time and guarded against its sinister march. The music of long conversations that mean nothing, save for their assurance that long conversations still exist somewhere in the hearts of the young.

For thirty minutes I watched The Great Unknown restore my faith in the possibility of accidentally stumbling upon a band that makes you want to sing until your voice is raw and stomp until your feet are blistered and ghostly. I have spent many years seeking out such possibility, going from Philly pub to Philly pub with the hope that I might leave with the desire to tell everyone about the band I just saw. Sadly, that expectation is most often met with disappointment, and I wind up wondering if anyone is yet to be discovered. But last weekend I was treated to thirty unexpected minutes of The Great Unknown, and now I know the search has been worth it. And it is worth it still.

It’s unfortunate that the indie world has become so bloated with expectation and slavish devotion to novelty and irony these days, because what so many local outfits miss in their efforts to become the next Arcade Fire or Deerhoof (fine bands in their own right, don’t get me wrong) is the bliss of being enveloped by the simple, singular pleasure of solid songwriting and a band bleeding its life on stage. Consider that just last month I watched a seven-piece group crowd the North Star with a violin, three guitars, synth keyboards and marching band drums. In all of their expected grandeur, those guys and gals couldn’t manage to eek out a single melody that came close to even the simplest lines of The Great Unknown. These dudes know how to summon the muse, and they do it damn well.

Look, this band isn’t going to push the limits of pop music evolution. The Great Unknown probably won’t rearrange the sonic landscape as we know it or woo the critics with its visionary scope. But I can tell you this: they will make you feel, they will give you one hell of a good show, and you’ll find yourself humming their tunes long after the others have packed away their violins and cut off the power to their canned orchestras.

With the PBR fair finally winding down I managed to catch up with Henkin as he and his mates packed up for a show later that night in Center City. But before I could get a word in to tell him how incendiary their set was, he looked at me and said, “So. Did it make you want an IPA?”

Check out The Great Unknown here. Or better yet, go see them play at Johnny Brenda’s on March 7. You won’t be disappointed.